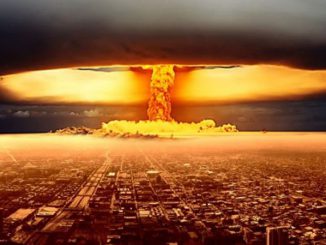 Worried about North Korea? Feeling concerned that nuclear war could break out any day now, either intentionally or by accident caused by mutual misunderstandings? Luckily, and despite the heated rhetoric, both sides are continuing to frame their threats in defensive terms – vowing bloodcurdling responses, but only if the other side attacks first.

Sure, it is tempting to blame this standoff on the flawed personalities of Donald Trump and Kim Jong-Un. Unfortunately though, this recent MIT report on public attitudes to several global war scenarios suggests that the American public is far more tolerant of the mass killing of civilians – either by nuclear or conventional means – than the nice people in the media commentariat commonly tend to assume. For example, the MIT researchers found that most of the US public (55%) feel OK about nuking Iran, if that would save a far, far lower number of American lives:

The findings demonstrate that, contrary to the nuclear taboo thesis, a clear majority of Americans would approve of using nuclear weapons first against the civilian population of a non-nuclear-armed adversary, killing 2 million Iranian civilians, if they believed that such use would save the lives of 20,000 U.S. soldiers. In addition, contrary to the non-combatant immunity norm thesis, an even larger percentage of Americans would approve of a conventional bombing attack designed to kill 100,000 Iranian civilians in the effort to intimidate Iran into surrendering.

What is interesting – and chilling – about this MIT study is that it negates the assumption that post –Hiroshima, the West has internalised a taboo against the first strike use of nuclear weapons, even against a non-nuclear adversary. Secondly, it also flies in the face of the assumption that the carpet bombing of German and Japanese cities in WWII has internalised a moral revulsion against the mass killing of tens of thousands of civilian non-combatants. Evidently not.

Thirdly, the authors found some support – of a limited nature – for the argument that the despots who rule authoritarian regimes may not be posing the main risk of global war. Equally it seems, the threat to mount a military first strike can arise from the electoral pressure on the politicians in social democracies. Like Taylor Swift, Donald Trump can claim: look what you made me do. Here’s the MIT report again, on that point:

Alexander Downes, for example, examined all known cases of “civilian victimization” in interstate war from 1816 to 2003, defining civilian victimization as “a military strategy in which civilians are either targeted intentionally or force is used indiscriminately” and that produces at least 50,000 non-combatant deaths. Drawing on quantitative data and historical case studies, he concludes that “states—including democracies—tend to prize victory and preserving the lives of their own people above humanity in warfare: desperation overrides moral inhibitions against killing non-combatants.”

Indeed, contrary to theories that emphasize that authoritarian regimes are more likely to target and kill foreign non-combatants, Downes found that electoral pressures on leaders in democracies make them “somewhat more likely than non-democracies to target civilians.”

No doubt, Kim Jong-Un and his paranoid crew are a deeply unattractive lot. Yet we have learned a few things about this regime. We now know that its over-riding priority is its own survival. To repeat: for all its fiery rhetoric, North Korea’s stance is mainly defensive of the homeland, and it regards its nuclear capacity as a vital insurance policy to that end. As mentioned before in this column, Libya’s Muammar Ghaddafi is a cautionary example of what’s likely to happen to leaders of authoritarian regimes that voluntarily give up their nuclear weapons. They end up deposed, and dead. Kim Young-Un has no desire to be a martyr.

That fact should be telling us that Pyongyang’s nuclear weapons are utterly non-negotiable. Like Pakistan, like India, and like Israel, North Korea has now joined the nuclear club, whether we like it or not. As this article in Foreign Policy argues, the best way of getting Pyongyang to give up its weapons is by letting it have them. As in:

Yet the United States… can entertain a long-overdue but usually dismissed course of action: answering North Korea’s call for normalizing relations and removing the animosity between the two nations. In this scenario, the Trump administration would make a couple of things utterly clear to the North’s leaders. First, that their provocations are suicidal: If they launched a nuclear strike on the United States or its allies, South Korea and Japan, they would be annihilated. Second, if they stop the provocations, Washington will formally end the Korean War with a peace treaty and normalize relations — even if the North remains a nuclear power.

Obviously, nothing in Donald Trump’s modus operandi suggests he would be capable of entertaining that course of action for a moment. But it is the only solution for lasting regional peace, and New Zealand – for one – should be advocating it, and joining with China in diplomatic efforts to pursue it. A Labour-led government could do so.

For now though, the unfortunate reality is that neither the UN nor the US have defined what the achievable aim of diplomacy actually can be, given the current circumstances. Surely, it cannot still be the elimination of North Korea’s nuclear stockpile. If it was, then why the blatant double standard – why no similar talk of global sanctions against India, Pakistan and Israel, let alone against the five traditional nuclear powers? Can the club that normalised nuclear ownership really be threatening nuclear war in order to hang on to its exclusive badge of membership? This ain’t no party, this ain’t no disco…

Pressuring China to force North Korea into some undefined form of compliance is not a sustainable answer. Not when China has such good reasons to oppose regime change in North Korea: it doesn’t want an influx of hundreds of thousands of North Korean refugees, and it doesn’t want to bring about a unified Korean regime that puts American military forces hard up against its own border. Therefore, if China is to accede to the current UN demands to pressure North Korea, there will need to be a prior agreement that the ultimate goal is not regime change in North Korea, nor the nuclear disarmament of Kim’s regime. Someone is going to have to give that bad news to US President Donald Trump. Quick – what’s a tweetable way for Trump to save face?

It is a strange, largely self-induced crisis. Look for example at how weirdly contradictory these two consecutive paragraphs are in this recent South China Morning Post article, about military tensions in the region:

US Joint Chiefs of Staff chairman, General Joseph Dunford has said that his goal for [his] trip was to further develop a working relationship with China, to lessen the risk of miscalculation on the Korean peninsula.

Yep, nothing like holding war games that simulate the war you say you’re trying to avert, and then holding them right on the border of the paranoid country in question. No risk of miscalculation there, no sir. OK, now for the snippet of good news. Apparently, Iran is sticking to its side of the no nukes deal, even as the Trump administration rages against continuing to observe its side of the bargain. As you’ll recall, Barack Obama’s deal with Iran was about creating an incentive for Teheran to forego its plans to develop a nuclear arsenal. That’s a good idea, right? Yet Trump seems hellbent on tearing up that deal – and this would then incentivise Iran to develop the weapons that the US could then use to justify military aggression against Teheran. Another case of Trump creating a self-induced global crisis, as Foreign Policy so accurately describes it. New Zealand needs to get off this wagon.

There isn’t an obvious link between Velvet Underground and mountain music… yet the drone is something they do both hold dear. Here’s the guitarist Sarah Louise Henson and Sally Anne Morgan, the violinist from the Black Twig Pickers… a duo who choose to record under the name House and Land. Their haunted and haunting track “The Day Is Past and Gone” is a telling reminder of just how scary this ancient form of southern mountain music can be…

If you like it, I also recommend going to House and Land’s record label site and clicking on their album track called “Rich Old Jade…”

Oh, in yesterday’s column, I linked to three cuts by the southwest Georgia (ie not Appalachian) folk musician Jake Xerxes Fussell. Here’s an older version of one of the prime cuts from Fussell’s new album. This track by Virginia native Helen Cockran dates from her 1970s session with the folklorists from the Smithsonian Institution, and features her version of the mysterious ballad “Pinnacle Mountain Silver Mine”… Love the photo that goes with this video.