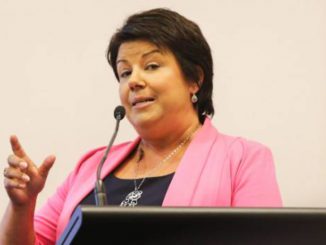 So, Police Minister Paula Bennett thinks some New Zealanders deserve “fewer human rights than others”. The New Zealanders now in the firing line being brown people, in gangs. To that end, National is promising to allow police to search cars and houses of criminal gang members for firearms at any time – without the Police needing to go to the trouble of having evidence, or obtaining warrants. Here’s Bennett:

“We just feel that there are some gang members that are creating more harm and are continuing to create harm … They have illegal firearms, police have a really good reason to suspect they have, and on that basis they are going to search. Some have fewer human rights than others when they are creating a string of victims behind them.”

Yep, it will be open season. Bennett believes some people deserve fewer human rights – and no property rights or privacy rights at all – when they’re brown, or when they’re a member of a gang. Is there reason to feel similarly concerned about what white people with guns can do? Or what about a crackdown on the ability of “some New Zealanders” in gun clubs to import military-style semi-automatics or pistols, which – as a select committee was told in April – do get stolen regularly, by criminal elements. Nope, there’s not much enthusiasm from this government for action on that front, despite the concerns expressed by Police Association president Chris Cahill:

“There appears to be a glaring omission… when it comes to tightening up on the tens of thousands of firearms imported into New Zealand every year. “We have to ask why on Earth we need all those firearms, why we need MSSAs and pistols, and why is it acceptable to not know where many of these weapons end up…”

To which at the time, Bennett had replied:

“We’re a hunting and fishing country, so it’s important that we have strong laws on the illegal use of firearms that don’t unfairly penalise responsible firearm owners.”

Yep, we have to be very, very careful about the legal rights of some voters with guns (ie, white people in gun clubs) while obliterating the legal rights of brown people in gangs. No word yet from the Maori Party about they think of Bennett’s comments. Yet her boss, Bill English, says there’s nothing to see here, move on. Here’s English on Morning Report, doing damage limitation on behalf of his deputy:

Oh that’s OK then. If we’re only infringing the legal rights of certain people that’s perfectly alright. The only concern that English/Bennett have is whether the voters might construe this as affecting the “human rights” of New Zealanders (white people, not in gangs.) The notion that human rights belong to all New Zealanders, and that the legal foundation for those rights cannot be selectively scrapped for certain groups in society by state decree, seems to be a totally foreign concept to the current government.

Let’s keep in mind just who we are entrusting with ministerial oversight of the Police on this matter. It’s bad enough that Bennett can’t properly articulate the policy for which she has ministerial responsibility. But in future, can we trust her to ensure the Police would use restraint in exercising this power to racially profile certain members of society, and search their private property at will, without warrants? The watchdog involved was in full flight at the National Party campaign launch only eight days ago. Feel afraid, feel very afraid at this.

The Bennett incident is a reminder of just how badly National performs when its own policies – and performance – are in the spotlight. As it did back in 2014, National can win another term if it can transform this election into a referendum on Labour’s policies, and not on its own. It has to keep the focus away from its performance during the past nine years in government. If National can engender sufficient fear of change – or uncertainty and dread about the alternative – it will survive. In fact, its the only way it can survive.

The ‘strong’ economy for instance, is almost a fiction that’s been created by spin, and by constant repetition. Keep saying it, and it becomes the received wisdom. In fact, this economy has been so weak – and its being predicted to decline from here – that the wages of most voters have been flatlining for the entire decade. In the first debate, English quipped that people can’t eat the ‘values’ that Labour leader Jacinda Ardern holds dear. Well… equally, people can’t eat the GDP figures either, given how those statistical gains are not being fairly shared, or wisely invested. Business commentator Rod Oram recently had sobering news about National’s “strong” economy, and it had precious little to do with the miracle working skills of the Great Helmsman, Bill English. Commodity prices, net migration and the Christchurch rebuild have been the main drivers of growth. You or I – or the Labour Party – could have managed those elements just as readily. Here’s Oram on our real, current state of economic health:

Thus, a more accurate measure of growth is real GDP per capita, which strips out the effects of inflation and population growth. That’s averaged less than 1% a year since 2008, close to the rate of other developed countries.

Likewise, wages have shown minimal growth in real terms. In contrast, our growth in hours worked per person was the third fastest in the OECD 2009-14. On the OECD’s Better Life index we rank 30th out of 38 countries on work-life balance.

Likewise, productivity. We are employing many more people than before the GFC. But that has driven growth in volume not value of economic activity. Consequently, our labour productivity growth 2009-14 was among the lowest in the OECD along with Mexico, Israel and Norway.

This dismal litany is what National calls strong economic management and ‘delivering for New Zealand.’ No wonder they’d rather talk about Labour’s allegedly ‘vague’, allegedly ‘uncosted’ policies. (Labour’s policy options are neither vague or uncosted.) Or what about Labour’s allegedly ‘secret’ tax plan, due to emerge from the tax review that Labour has announced it will conduct. Memo : if you’re going to hold a truly independent review of the tax system, you can’t prejudge its findings. That’s not being secretive. Its being responsible.

If voters get spooked by what that tax review might eventually recommend, here’s something far more immediate to get spooked about. Under National, house inflation is predicted by the RBNZ to kick back into overdrive again next year, and is set to rise by 6% per annum in 2018 from its current 5% level.

Finally, need I mention that the surplus of which National is so proud has been created at the expense of a disintegrating public health system and public education – both of which have been systematically starved of funds, as reflected in the declining share of the country’s GDP that public heath has received over the course of this decade. Yep, no wonder National would rather engage in scare-mongering about the phantom threat posed by Labour.

A couple of years ago, Jake X. Fussell’s debut album brought together some of the finest musicians – Joan Shelley, William Tyler – from the latest round of folk revivalism. Fussell is now back with this terrific single (from his new album What in the Natural World) that’s basically a reworking of the old Memphis Jug Band 1920s song “Peaches in The Springtime”:

Clearly, the guy has a thing about sweet potatoes. They featured in his fiercely optimistic “Raggy Levy” track from the first album as well:

If you’re looking for a political hook, there’s this 2015 track, a song traceable back at least to Uncle Dave Macon, during the Depression years. It still seems relevant today, for anyone trying to avoid being conned again at this election:

Now this is the truth,
and it certainly exposes,
That Wall Street’s proposition,
is not all roses..

Its hard times when you’re down and out…