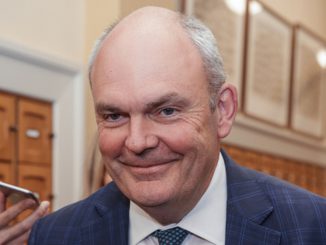 Can National succeed in lying its way into a fourth term of office? Given its entirely fictitious claims of a $11.7 billion hole in Labour’s alternative budget, it won’t be for lack of trying. In fact, National can win this election only if it can scare the public about the alternative. Sadly, that’s a sign of the moral erosion that’s happened in conservative politics. Once upon a time, conservatism was about protecting what’s worth preserving in our traditions. Now it is all about inciting fear of change, and by any means available.

Its not a new thing. Remember when John Key used to describe Working For Families as “communism by stealth”? Now WFF is core National policy. And Kiwisaver? (Key: “It won’t work. It’s a glorified Christmas Club.”) Now, Kiwisaver too is core National policy. Remember when climate change was just a fanciful notion of those wacky, scary Greens? Now National’s deputy is proudly proclaiming National’s commitment to the Paris agreement.

Two and half weeks out from the 2017 election, National has just discovered child poverty, after ignoring its existence for three terms in office. Back when it was first being raised in 2011 – remember the Bryan Bruce documentary? – National were more interested in bailing out Canterbury Finance and arranging the partial sale of the state’s energy assets to their mates. Last year, it rejected opposition moves to extend paid parental leave. A week or so ago, it embraced it, in a desperate attempt to stop women from voting for Jacinda Ardern.

Six years ago, expert reports on the extent of New Zealand’s child poverty were being brushed aside with partisan ugliness by MSD Minister Paula Bennett in Parliament here and also here and by John Key here.

In fact, one striking aspect of the 2017 election is the extent to which its main policy themes have originated from outside the two major parties. The climate change issue now so dear to Labour’s new leader? As mentioned it came from the Greens, as did the emissions trading scheme response that National has since adopted, in lieu of a carbon tax. Child poverty? Metiria Turei put this issue on the political agenda at the 2011 election and again in 2014. Labour’s capital gains tax proposal on all but the family home? Again, this came from the Greens, via former co-leader Russel Norman. The home insulation programme that National so proudly cites as its response to families in need? Again, this idea originated with the Greens. Time and again, this supposedly flaky party has generated policy ideas initially treated as scary and wacky and anti-business – and then quietly mainstreamed by both Labour and National, without the sky falling, or the economy tanking.

It’s a vision thing. Or the lack thereof. Looking across the political landscape, it is striking how few of its main features originated with the National Party. They’ve been a vision-free zone for decades. Kiwibank? That originated with the scary Alliance, as the brainchild of Red Jim Anderton. By 2010 it was so successful Bill English was planning to privatise it.

Working For Families, the Cullen Fund, paid parental leave? All Labour, all opposed initially by National amid dire warnings about the likely repercussions.

Look back over the past 30 years and many of the innovations by the National governments have either been costly catastrophes (eg the business-led health reforms, the benefit cuts of the early 1990s, and the 1991 workplace health and safety reforms that led directly to in the Pike River tragedy) or have been scrapped (the Employment Contracts Act.) As RNZ’s Brent Edwards pointed out last December, the enduring positive policy contributions that National has made did not originate with the risk averse Key/ English duo. They were introduced by the much-derided Bolger government, which was willing to take genuine political risks. Yes, the Bolger era had major failings (see above) but it also gave us MMP, a meaningful round of Treaty settlements, and the raising of the age of eligibility (to age 65) for a state pension.

Instead, the Key/English duo has largely just tinkered with what it inherited, while denying the existence of unmet problems in housing, child poverty, public health and income inequality. At least while Nero fiddled as Rome burned, Nero opened up his house to the Roman homeless, paid for the relief effort out of his own money, and launched a crash programme of new urban housing. And according to Tacitus, this rebuilding of Rome was paid for by running a budget deficit, and by raising new taxes. Alas, Nero also did a fair bit of scare mongering about the Christians, who allegedly had a whole raft of wacky ideas. Christians. Who’d want them anywhere near the seat of power.

Footnote One: The productivity lie. In the first debate Bill English lied about New Zealand’s widely recognized problems with labour productivity. According to English, everyone else from the OECD to JB Were economist Bernard Doyle is wrong on this point. A “ Trump like denial” is what commentator Bernard Hickey called it. As Hickey indicated, English has had all the Treasury, OECD and IMF facts at his fingertips, and he knows the truth. He just chose to misrepresent it. The evidence that proves English wrong is here, and also here.

Moreover, the OECD report that lamented how New Zealand productivity has flatlined – as Jacinda Ardern said, and English denied – can be found here. Certainly, the OECD described a far less rosy reality than the one that English was trying to spin:

Easy to see why English was aiming to mislead voters by claiming the exact opposite. Some could even say he was trying to put lipstick on a pig.

All of them pointed out that this “hole” is not – as Joyce has claimed – a shortfall in the allowance for operational spending, but is an accounting fiction. All monies are there and accounted for, and were simply being allocated by Labour and National differently, to different lines on the same set of accounts. Regardless, Bill English re-broadcast the Joyce claim to hundreds of thousands of voters during the second debate. The line-up of economists rejecting Joyce’s conclusions can be found here. The Brian Fallow response ( “The money isn’t missing. Its just been re-allocated.”) can be found here and Fallow’s brilliant, initial analysis can be found here.

Call me suspicious, but I think Steven Joyce knew all this before he opened his mouth. If he didn’t, we’ve got a seriously illiterate Finance Minister. Fool or knave ? Take your pick. As usual in the age of Trump, the lie got more mileage than the rebuttal. Fake news, Mr Joyce. Sad.

And from 1974, here’s an appropriate theme song for the kind of campaign that National is choosing to run in 2017….

Hanging on every word
Believing the things I heard
Being a fool….